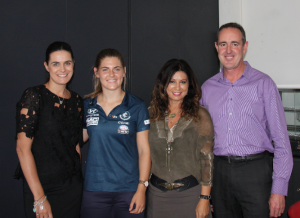 This photo represents a culmination of many things to me: it was International Women’s Day and John Hollands, the legendary engineering company, was celebrating the women in its ranks. It was also the day we were launching Women of Worth, a program designed to empower women in their personal and professional lives. But like most things, I had planted the seed for this moment much earlier, when I met the senior John Hollands team at an off site event where I was welcomed as a guest speaker.

Even after speaking at hundreds of events, I’m always a bit nervous. Speaking at John Hollands was certainly no different. But as the night moved along it became clear I would be presenting during dinner– could I compete with hungry stomachs and requests to pass the salt? I hoped so.

Taking My Own Medicine

I try to follow my own teachings: big breath, remain mindful, be authentic. Begin. Within a few moments I was grateful to have the attention of the room as I talked about human potential. Yes, everyone in that room was human, just like me. Looking to improve. Often feeling vulnerable and imperfect. Wondering what it takes to make change happen.

Soon I realized that dinner had been served and things were still going well. Those hungry people actually wanted to hear more!  I began to talk about how the biggest obstacles we face are usually things we tell ourselves. If we can break through that barrier of self talk, potential awaits. We can change. Not only as people, but as organizations. I’ve built my twenty year career on it.

Setting Yourself Up in This Moment Leads to the Next

That moment when I started to speak even though people were buttering dinner rolls and I was a bit nervous? That led me to the opportunity to speak again at John Hollands and this very photo on International Women’s Day. Loren Tairi, who invited me to present, was my champion, believing in me and working to make sure I was part of this celebration. Trevor Hall saw the value in strengthening the regional corporate culture of John Holland as an advocate for career progression and developing female talent.

Finally,  I couldn’t believe my luck in meeting Madeline Keryk, AFLW footballer of the highest caliber. What impressed me about Maddy was that she was incredibly humble…all while having every intention to succeed in a sport that is traditionally male. Graduating from the University of Melbourne with a Bachelor of Science, Madeline plans to apply for her Doctorate of Physiotherapy. She plays for Melbourne Uni in the VFL and was drafted from there to Carlton, where she is co-vice captain. (I did catch myself secretly hoping she was once a Collingwood die hard– like me!)

Of course, I had to ask Madeline if she would be a guest speaker for Women of Worth and she said yes. Maddy’s a pioneer, opening the door for women of all ages and from all spheres of society to step out and follow their dreams. Her topic, “Being Bold and Courageous”, is something she lives daily.

All in all? Not a bad day. And to think that it all started with me taking a big breath and beginning to speak even though I was nervous.

Want to be bold and courageous?

Join Madeline Keryk, me and other accomplished women in Melbourne on Friday, April 28th.Visit  https://www.womenofworth.com.au/2017-programs/ to sign up today. Women of Worth has been a work in progress for over twelve years. Together with my dear friend and colleague Christine Mahoney, WOW has found its place in several countries, touching thousands of women in all strata of society. We are so pleased to be delivering this program to John Hollands on behalf of Systemix.  http://www.systemix.com.au/our-people/page/2/