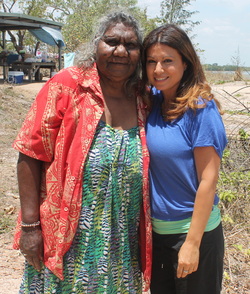 “Everything you do has the power to change the world. We never know who will be touched by our words or inspired by our actions.”

Sometimes, your heart leads you to the least likely of places. My heart led me to one of the greatest SHIFTS in my professional life (more on that later).

Five years ago, I was a senior manager and my corporate career was flying high. I spent most of my time donning my power suit and trekking all around the world.

The time eventually came for a much-needed holiday so I took four days off and escaped to Cape York.

My journey saw me striking up conversations with indigenous elders who became interested in notions such as community ownership, self-determination and SHIFT.

These elders invited me into their community. Four days became two weeks… Two weeks turned into three months and before I knew it, I’d spent a year living amongst the community.

One day, I received a phone call from my boss asking me if I was ever coming home. The answer to that question was driven by another:

So, back to my colleague’s question: “Was I ever coming home?” No!

I had found the SHIFT and it had impacted on me so deeply I knew I could never return to my corporate job.

SHIFT always lies in the need for conversation. Within that conversation is a story of epic proportions… A story that has impacted many and is likely to impact you too.

This is my story
Let me begin by being totally honest with you. My story is really Napranum’s story and revolves around SHIFT: From paternalism, punishment and prohibition to self-determination and community ownership.

Welcome to Napranum (when translated, it means ‘meeting place’). It’s an hour and 15 minutes away from Cairns… Turquoise blue water, golden sands and  beautiful people. Heavenly!

Despite being closely located to a wealthy, thriving mining community, Napranum was considered poor and overcrowded.

Upon being brought in to help develop a visionary plan for the community’s future generations, I asked many prominent people within the community to paint me their vision for the future.

This ‘wish list’ looks like a basic list of necessities for most of us. Just imagine living in a town where there was no supermarket to buy your groceries.

Napranum was labeled the second poorest community in Queensland.

Fast-forward two years and we’re seeing the direct result of SHIFT in action:

A staggering 90% of the community’s goals have come to fruition.

So, how did we create SHIFT?

Any SHIFT involves a critical moment in time. A time when things just happen and everything falls into sync.

It all comes back to what I call the ripple effect. In this case, we created more of a wave within the community as opposed to a ripple.

We created community change by working towards economic and community growth. We focused on balancing and building the spiritual wellbeing of Napranum’s people because we knew neither could work in isolation.

We went back and asked those age old questions: Who are you? What do you want to help to create?

We got the entire community involved: Community leaders, young adults, students, elders, parents… We identified people’s capabilities and skills and gave them the confidence they needed to be ready to jump in and give things a go when the time was right. This all harks back to belonging.

In a nutshell, we turned problems into possibilities. Napranum was never a problem to be solved: it was always a community filled with possibilities just waiting to be discovered.

As you can see, community drives this process.

We did all this with the community, not TO THEM. And credit to the government: they stood back and let us take a strong hold on that steering wheel.

“Life is like a rose, along that stem there are many thorns but we must never lose sight of that rose at the end of that stem.”

Councilor Maryann Coconut shared this quote with me very early on and it served us well as our visionary plan continued, overcoming whatever challenges were thrust upon us along the way.

Going back to the beginning of this blog post… I mentioned that the decision to follow my heart led me to one of the greatest SHIFTS in my professional life.

I remember this moment like it was only yesterday. One day while at home, I received a call from Maryann and she said she’d been thinking about me. What I heard next floored me (in a good way).

Maryann said she wanted to make me an adopted daughter of her tribal land. Honoured, I immediately accepted.

So my Aboriginal name is Kili and my totem is the lorikeet, likening me to being the messenger between Heaven and Earth.

Anyone who’s heard me speak would’ve heard me say that once you tap into your sense of self as a dream builder and visionary, there’s no going back.

I stand by this with the knowledge that real SHIFT never has an ending and impacts us for life.

My message to people is very simple: Never give up on your dreams, regardless of the adversity faced.

This is my story. You can read more here. And check out my TED talk below.